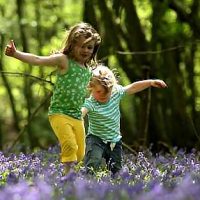 Most people spend about 95 percent of their time inside: in houses, cars, shops, cafes and offices. We are becoming an indoor species increasingly shut off from sky, land, waterways, plants and animals. Nature is becoming more and more abstract to us. We are disconnected from it and yet we are still very much part of it because everything we do affects it.

The problem is severe for our children who now spend up to eight hours each day in front of a TV or computer and less and less time in nature. Author Richard Louv describes what he calls “nature deficit disorder” as the loss of our sense of rootedness in place and the loss of our connection to the natural world.

“I like to play indoors better, ’cause that’s where all the electrical outlets are.” To Richard Louv, this comment from a nine year old is further evidence of our children’s diminished ties to the natural world, a disconnection he believes is making them sick. Obesity and depression, he argues, are hallmarks of childhood in an increasingly plugged-in, online world.

Louv, a columnist for the San Diego Union-Tribune and author of the book Last Child in the Woods: Saving Our Children from Nature-Deficit Disorder, suggests that “nature-deficit disorder” be used to describe the “human costs of alienation from nature,” including, in his view, various physical and mental illnesses. He cites new studies that offer hope, linking exposure to nature with improved cognitive abilities and mental health in children, and to a reduction in Attention Deficit Hyperactivity Disorder (ADHD) symptoms. Louv writes of his own childhood: “The woods were my Ritalin.”

Louv endorses environment-based education, in which the local landscape is a curricular focal point, and he praises communities that are on the cutting edge of preserving nature and making it available for child-friendly exploration.

As Fritjof Capra says: “We need to teach our children and students the fundamental facts of life – that one species’ waste is another species’ food; that matter cycles continually through the web of life; that the energy driving the ecological cycles flows from the sun; that diversity assures resilience; that life, from its beginning more than three billion years ago, did not take over the planet by combat but by networking.”

For our own personal well-being we must reconnect ourselves and our children with nature. And it is important for a sustainable future that all people directly see the connection between what they do and the way it impacts on the environment. Only then can people become aware of their responsibilities.